The Supreme Court has its calendar set through January 2018 with ten cases already accepted for argument that are as of yet unscheduled.  The total number of case grants so far is 53, and with consolidated cases this will lead to 47 arguments.  This puts the Court on pace for one of the slowest grant rates in recent history.  Petitions have not dropped in number though.  With upwards of 8,000 petitions filed each year, this creates an atmosphere of increasingly fierce competition for the justices’ time.  Since several attorneys have more than one case granted for argument during the current term, fewer than 50 attorneys of record currently have arguments slated for Supreme Court oral argument.

This post looks at those attorneys. It examines who has filed successful petitions for the current term. It also tracks these attorneys’ success at bringing cases to the Court on cert since the 2013 term. Many of these attorneys are regulars before the Court; members of the colloquially dubbed Supreme Court Bar of elite attorneys.

Looking at all successful petitions not including those emanating from the federal government, the following graph shows the counsel of record for all petitions granted this term and the number of cert petitions these attorneys have filed since the beginning of the 2013 Supreme Court term. 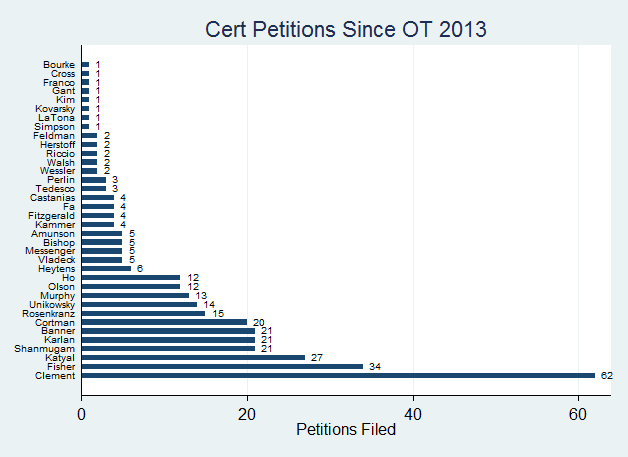 Paul Clement has participated in almost double the number of filings as the next attorney on the list, Jeffrey Fisher.  Many of Clement’s petitions which were later denied were filed on behalf of R.J. Reynolds Tobacco.  Other attorneys not already mentioned with 20 or more petitions filed since the 2013 term include Hogan Lovells’ Neal Katyal, UCLA Supreme Court Clinic’s Stuart Banner, and Alliance Defending Freedom’s David Cortman.

Jeffrey Fisher who is often noted for his cert success (see for example on page 27 of this paper).  The other attorneys with current grants and five or more granted petitions since 2013 were all discussed above aside from Jenner & Block’s Adam Unikowsky.  Unikowsky’s role in this process should not be understated though as is apparent from the next graph that looks at the successful petition rate for the attorneys listed in the previous graph. 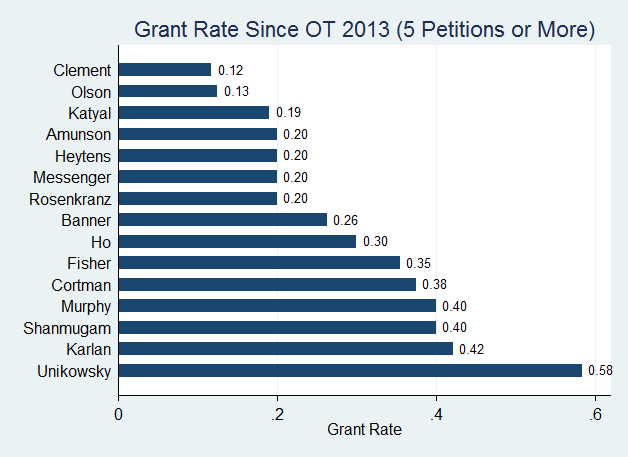 With seven grants out of a total of twelve petitions, Unikowsky’s 58% cert success rate since the 2013 term tops the list for these attorneys.  After Unikowsky come Pamela Karlan, Kannon Shanmugam, and Ohio’s Solicitor General – Eric Murphy.  Murphy saw four of his ten petitions since the 2013 term granted by the justices.  After David Cortman and Jeffrey Fisher, Morgan Lewis’ Allyson Ho has a 30% grant rate for this period on three grants out of ten petitions filed.

Several of the attorneys with grants for the current term also have other petitions currently pending before the Supreme Court without a cert decision.  These attorneys and their number of currently pending petitions (both when they are counsel of record or another attorney working on the case) are listed below:

The group of attorneys covered in the post presents a picture of some of the most successful attorneys that currently practice before the Court. Some of these attorneys including Paul Clement, Neal Katyal, Josh Rosenkranz, and Ted Olson are veterans in this business.  Several younger attorneys including Kannon Shanmugam, Adam Unikowsky, and Allyson Ho are currently rising to the top of the ranks of Supreme Court practice.  Finally the two Supreme Court litigation clinics that were both mentioned above, UCLA’s and Stanford’s, are proving to be two of the most successful programs in terms of bringing cases to the Court in recent years.

Note: There are instances with multiple successful petitions for the same attorney in the same case. In these instances when multiple petitions were joined in one case, I counted the number of granted petitions as one.