With the Supreme Court term about to begin many eyes will be on a small handful of cases. The interest in these cases generally surrounds certain salient case issues. In this respect this term has a lot to offer. The Court will review the federal government’s Deferred Action for Childhood Arrivals (DACA) policy. It will look at the constitutionality of health care mandates from the Affordable Care Act. It will even examine a New York law dealing with transporting a licensed firearm under the Second Amendment. The Court has granted a total of 51 cases to review in the upcoming 2019 term. Of these cases only one, Opati v. Sudan was decided below by the D.C. Circuit (Trump v. NAACP was also heard in D.C. but by the District Court for D.C. rather than the Court of Appeals.), the Court of Appeals where more Supreme Court Justices got their start than any other. This circuit has been acknowledged as special and unique (this article is behind a paywall) by none other than the Supreme Court’s Chief Justice John Roberts. But what makes it unique, who are the judges that sit on the Court, and what is their relationship to the Supreme Court? These questions and others will be analyzed below looking at data (partially derived from the Supreme Court Database) from cases decided between the 1986 Supreme Court Term when Rehnquist was elevated to Chief Justice and the most recent 2018 Term.

The D.C. Circuit isn’t the largest federal circuit by a long shot. According to the statistics from the Office of the U.S. Courts, the D.C. Circuit actually heard the fewest cases of any of the federal courts of appeals this past year (statistics for the Federal Circuit Court of Appeals is listed separately from those of the other circuits).  It also had the fewest cases per judge of any circuit, with each judge averaging 44 written decisions. This is compared to 232 written decisions per judge for 11th circuit judges.  Even though it decides the fewest cases of the circuits, the Supreme Court granted more petitions for cert from cases from the D.C. Circuit since 1986 than it did from three of the other circuits.

One area where the D.C. Circuit is unique is in Supreme Court reversals. D.C. Circuit decisions have been reversed the second least frequently of decisions from any circuit over this period. 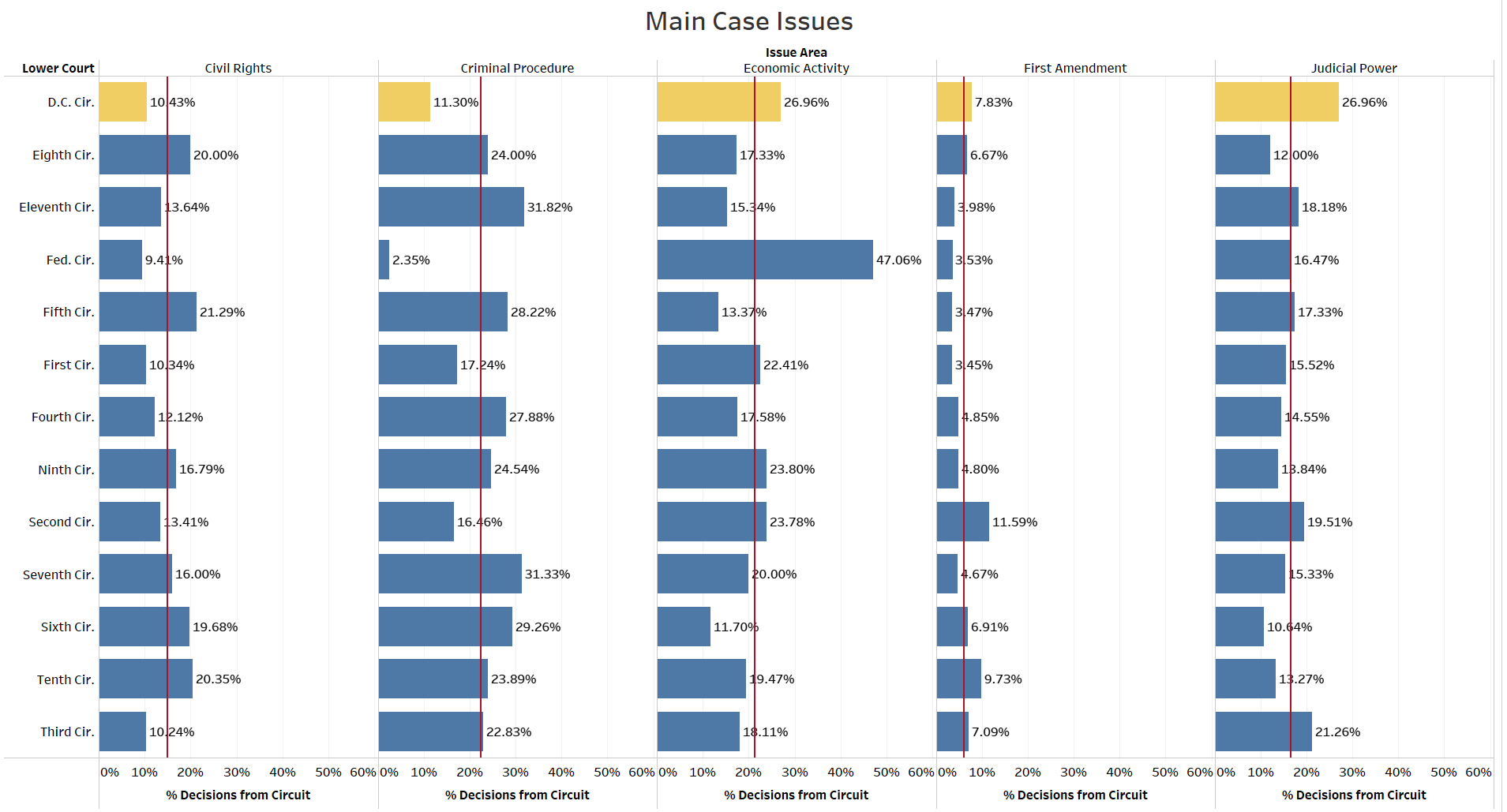 The percentages show the rate of cases within each circuit and the red lines mark the average frequency of each case area across circuits.  The D.C. Circuit had well below the average rate of civil rights and criminal procedure cases for this period compared with rates from other circuits. It had just about the average frequency for First Amendment cases. The D.C. Circuit had a higher frequency of judicial power cases, however, with cases in this area composing over 5% more of its Supreme Court caseload than those from any of the other circuits.

One major distinction between the D.C. Circuit and other courts of appeals lies within the frequency with which it hears cases originating from actions of federal agencies. As the federal appeals court based in D.C., the D.C. Circuit hears the bulk of such cases due to its geographic location and statutes that grant the Circuit appellate jurisdiction in such matters. The D.C. Circuit’s experience with such cases is apparent when comparing Supreme Court cases by circuits that originated in agency actions. The figure below shows the fraction of cases per circuit since 1986 that originated in agency actions.

Of the cases the Supreme Court heard during this period, only six were based on cases where the D.C. Circuit affirmed an agency’s decision.  Within this set of cases, 20 agency decisions were overturned and three more were vacated. While more EPA decisions led to this set of cases than decisions from other agencies, these cases came from a diverse set of agencies without any one of them dominating the mix in either affirmances or reversals. 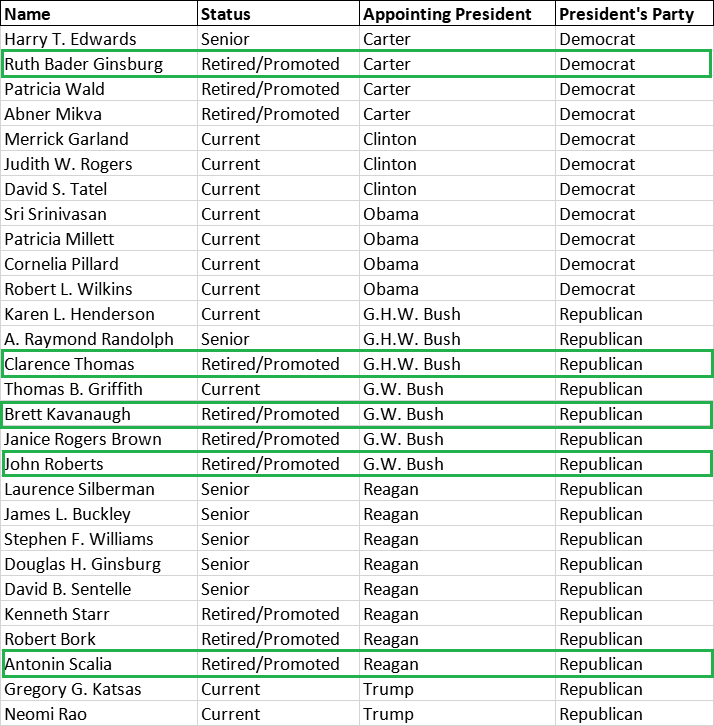 When we look at D.C. Circuit judges whose majority opinions were later reviewed by the Supreme Court, Judges Silberman and Randolph were tied with the most with 11 apiece.

Scalia wrote majority decisions in more of these cases than any other Supreme Court Justice with 16. He affirmed 50% of them and only reversed 37.5%.  Of the justices that wrote majority opinions in at least eight cases coming from the D.C. Circuit only Breyer and Thomas had higher affirmance rates than Scalia.  Judges with high reversal rates of D.C. Circuit decisions with more than three total decisions in this set include Ginsburg at 62.5% and Roberts at 66.67%.

The D.C. Circuit hears many cases garnering a great deal of attention. Between these attention grabbing cases and other cases that share aspects with cases heard in the Supreme Court, the D.C. Circuit should remain a breeding ground for Supreme Court Justices for foreseeable. If President Trump can push the center of the circuit farther to the right with more appointments, the nature of the circuit and the decisions it puts out may very well shift right as well.  Although the Supreme Court has also become touted as more conservative than in the past based on Trump’s two confirmed nominees, the question remains of whether these reshaped courts will align more closely in their decisions than before as some predict, or if they will each go in their unique directions without any additional shared values between them.