On October 2nd, the Supreme Court will be back in session with the first oral arguments of 2017.  Since Justice Scalia passed away in February 2016 the justices have taken a light caseload and generally have not heard cases that would lead to great rifts among themselves.  This non-divisive set of cases during the 2016 term mixed with the justices’ self-declared effort to work together led to fewer cases splitting the justices votes than usual.  This is evident with almost as many five vote majorities in cases argued in April with Justice Gorsuch on the Court (3) as the Court had the entire rest of the term (4).

One main indicator of the tenor of this first month is the level of experience of the players involved in the cases.  Orrick’s Brian Goldman was thinking along similar lines when he looked at total oral argument count for all attorneys during the first day of 2017 oral arguments.  These experienced players come in the form of the attorneys and amici involved in each case.

Focusing on the attorneys for the parties in each case, at first blush this term does not seem like such a significant transition from the last.  The figure below shows the total number of cases argued in the past by all attorneys arguing in October of a given term. 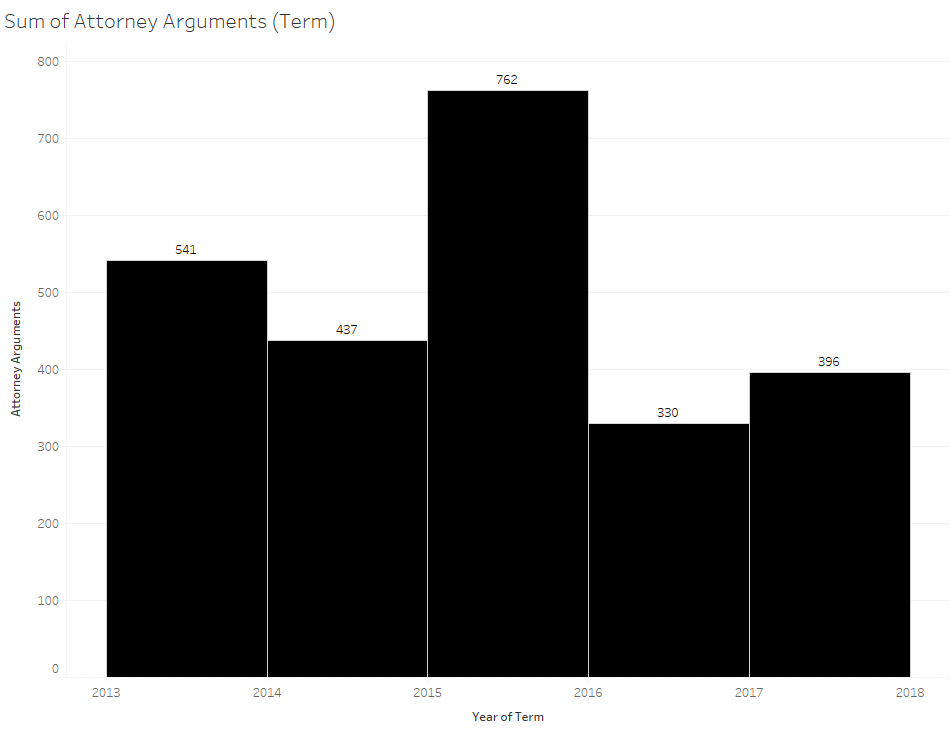 While the total argument count for all attorneys arguing this October exceeds the total from last term, it is below the counts for the 2013, 2014, or 2015 terms.  Now this is also related to the number of cases argued in October over the last several years.  In 2017 the Court will hear eight arguments in October – the same number it heard in 2016.  In 2015 the Court heard ten arguments in October, in 2014 it heard eleven, and in 2013 in heard nine.

One way to test the magnitude of importance of the individual cases is through the arguing attorneys’ experience.  Before getting into this measure I’ll draw attention to an inherent bias in it against female attorneys.  Female attorneys have not had the same opportunity to practice before the Supreme Court as men and so they only make up a fraction of these attorneys.  In 2017 for instance, only 17% of the attorneys arguing in October are female.  With this caveat in mind, the figure below shows the cases with the greatest total number of argument for the attorneys arguing cases in each October since 2013.  These counts were derived data on Oyez.org and include the argument counts through the year of each case except for 2017 (for instance if a case was argued in 2014, the argument total for an attorney in that case would be the sum of that attorney’s arguments through the 2014 term).

Several attorneys heavily weight the sums of particular cases including (at the top of that list) Edwin Kneedler, Michael Dreeben, Paul Clement, Carter Phillips, and Seth Waxman.  Phillips and Clement argued in FERC v. EPSA along with former-SG Donald Verrilli.  Edwin Kneedler argued along with Jeffrey Fisher and Juan Basombri in OBB Personenverkehr and Kneedler and Josh Rosenkranz will argue the Dimaya case this term (here is the October hearing list for 2017).

From 2017, Dimaya is towards the top of this list along with Murphy Oil farther down.  This can be compared with the 2016 cases which tend to fall lower in this list with Salman towards the middle and Samsung at the bottom.

Another way of looking at this is by averaging the the number of arguments for arguing attorneys in each case. 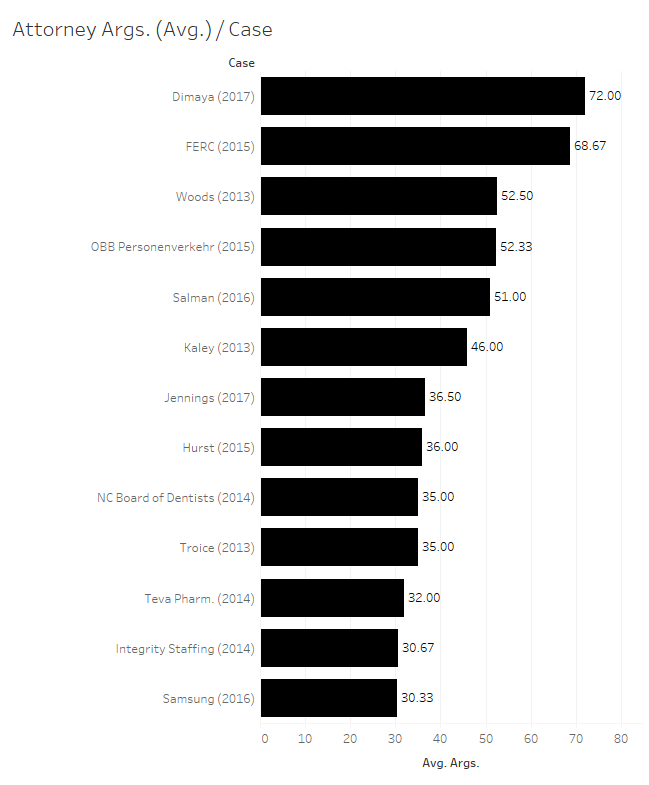 Here, Dimaya tops the list with only two arguing attorneys and FERC with three arguing attorneys falls below it.  Jennings v. Rodriguez (the other case relisted from last term to this term along with Dimaya) is also in this figure as two attorneys will argue this case, one of which is the experienced OSG (Office of the Solicitor General) attorney Malcolm Stewart (the other attorney arguing in this case is the ACLU’s Ahilan Arulanantham).

Another way of viewing the importance of the October cases is through the amicus filers.  This year marked a large uptick in the number of such filings on the case merits for October.  The figure below shows the cases argued in October with the most amicus briefs filed since 2013. 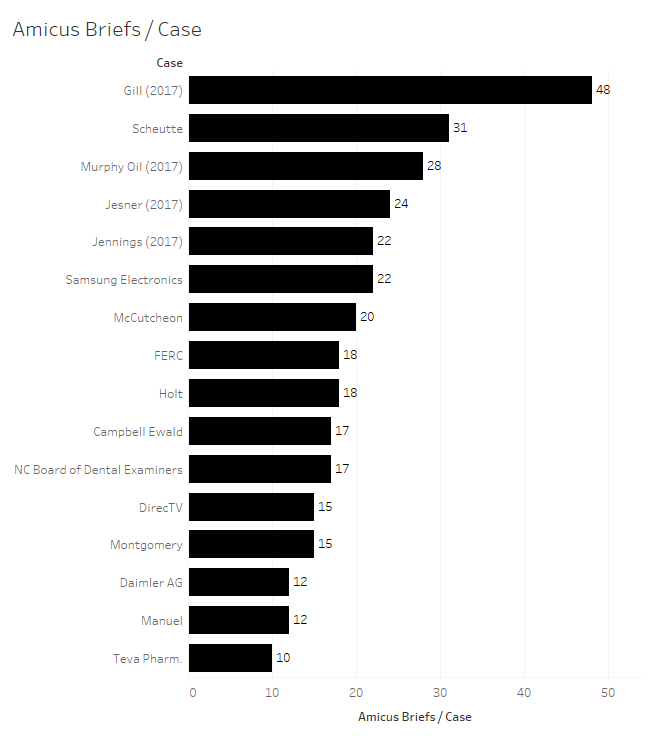 For Octobers since 2013, four of the five cases with the most amicus briefs filed on the merits will be argued in 2017.  The second case in this figure is 2013’s Schuette decision which upheld the validity of an anti-affirmative action provision for state universities in Michigan’s constitution. If this post included the 2012 term the Fisher I case would also appear due to its large number of amicus briefs.

The average number of merits amicus filings per case for October cases also shows 2017 at the top by a wide margin.

Looking now at the total amicus experience in terms of such briefs filed at the Supreme Court level for filers in October 2017 cases we see a large disparity of experience.

The most experienced amicus group in the mix, the ACLU filed a brief in Gill helping to propel it to the top.  It also filed a brief in Wesby.  The Chamber of Commerce of the United States along with the Washington Legal Foundation filed amicus briefs in the Murphy Oil case.

Any way you slice it the justices appear ready to tackle a substantial caseload in 2017/2018 term – at least in terms of case caliber.  While this post only looks at October and the Court has not scheduled arguments beyond November, if the first months are any gauge of what is to come, we can expect other cases with large-scale implications to follow.