The Supreme Court finally appears decently situated to complete its decision making for the term.  Some holdups are still in play including the long since argued case of Gill v. Whitford.  Gill was argued 255 days from the next possible opinion release date of June 14, 2018.  Only 10 cases have taken longer to decide since 1946.  With 39 cases signed decisions so far this term composed of over 90 different opinions, the justices have cobbled together opinions of varying complexity.  The justices perceived necessity of defending their positions is evident from the six decisions with 5 to 4 justice voting splits along ideological lines that left the liberals in dissent.

It is one thing to say a case or an opinion is complex.  Measuring varying levels of complexity is an entirely different animal.  Past papers have used the number of legal provisions and issues as a proxy for case complexity. Another way to observe decision complexity is through elements distinct to each opinion rather than each case.  Two basic metrics that shed light on this type of complexity are word count (a topic previously covered by this blog) and citation count.  Along with these two elements, this post examines components of the citations in each case to further peruse the diversity of justices’ choices within opinions.

While some justices are naturally inclined to greater verbosity, the justices have each written a fairly similar number of opinions of more than 5,000 words so far this term.

While historically not often the justice with the longest opinions, Justice Alito is clearly ahead of the pack of other justices for most opinions lengthier than 5,000 words so far this term.  As University of Washington law professor David Ziff recently point out though, it is Alito who railed against Breyer for the length and complexity of his opinion in Husted.

Alito’s concern over length is a bit perplexing, however, as his majority opinion is almost 500 words longer than Breyer’s dissent (the lengths of both are shown in the first figure).  Conversely, in ten instances or over 1/4 of the decisions so far this term, a dissenting opinion has been lengthier than the majority opinion.  Those instances are shown next. 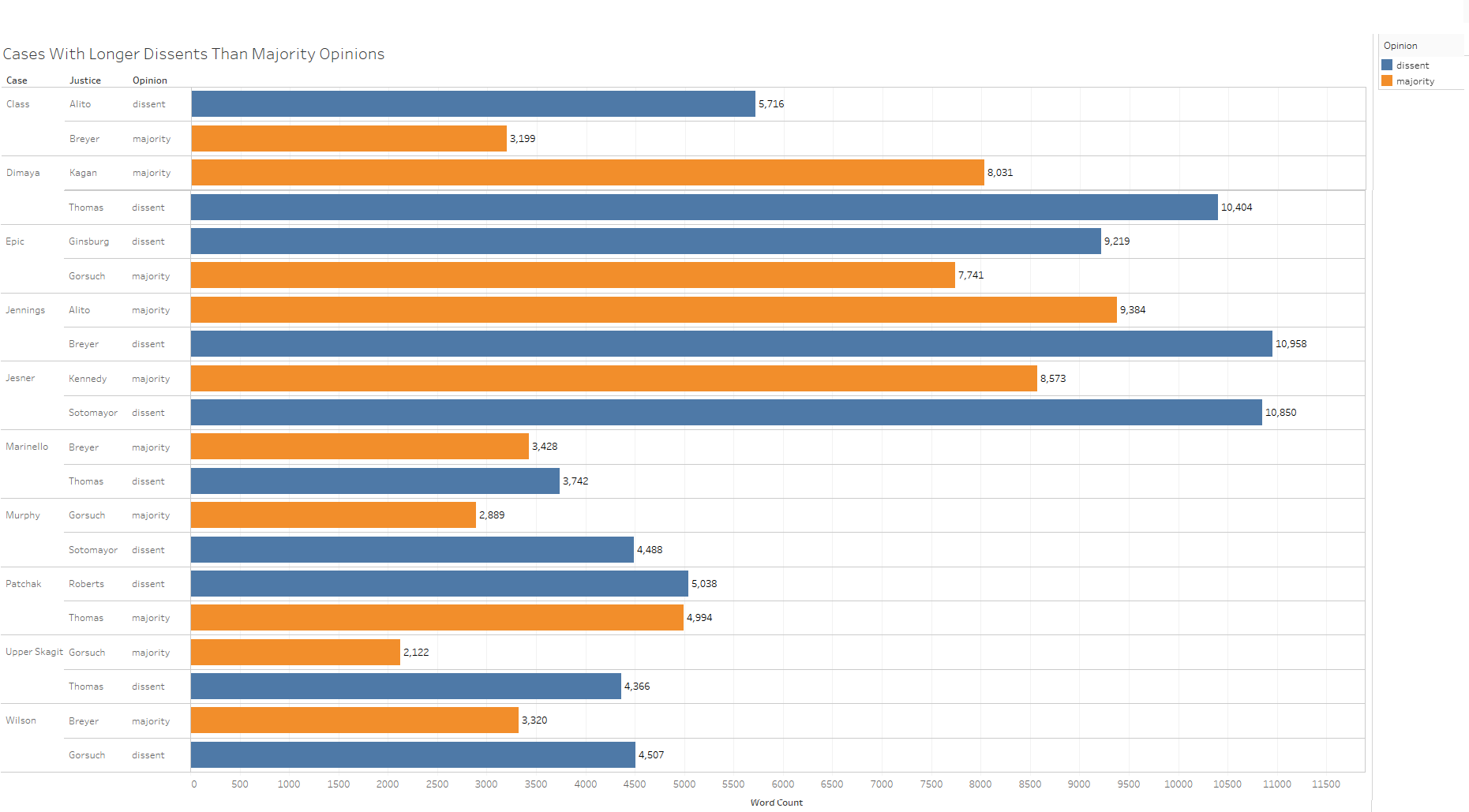 To be fair to both Alito and Breyer, Breyer’s dissent in Jennings, the longest opinion so far this term, was much lengthier than Alito’s majority opinion in that case and so perhaps Alito was still boiling over from this previous experience.

Opinion length is a related to multiple factors though.  These include the authoring justice’s writing style but also the case facts, applicable law as the justice sees it, and the justice’s perception of how to respond to other related opinions from the same case and from the Court’s catalog of precedent.  With all of these factors weighing on a justice’s choices when authoring an opinion, it should be no surprise that there is actually great variability in opinion length both within this term and across terms.  The following figure shows the opinion length distribution for all opinion so far this term. 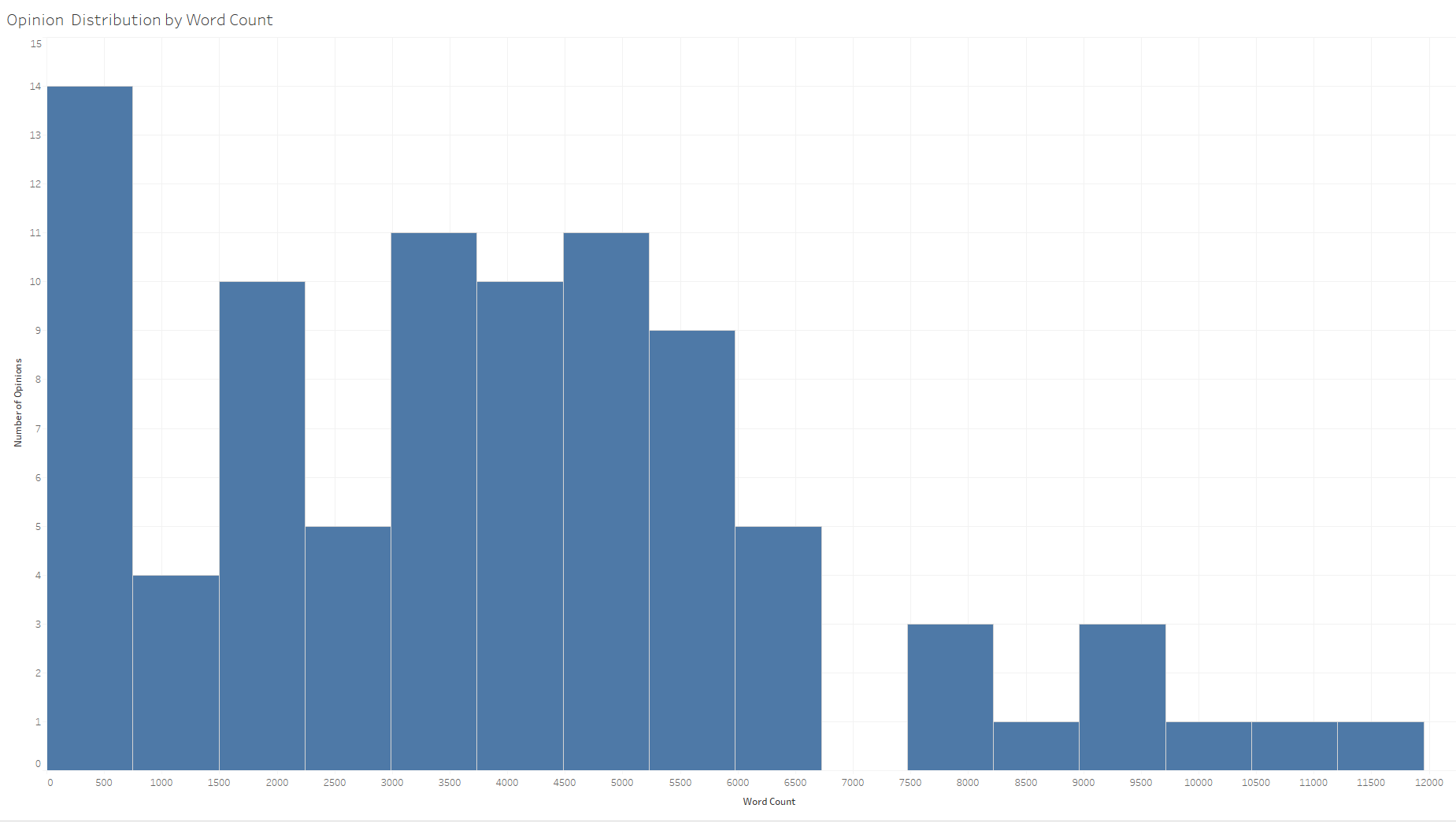 The notion that the justices personally diversify opinion length is apparent from the variation in length of majority opinions so far this term.

Opinion length only tells part of the story of opinion complexity.  A look at the relevant law analyzed in each opinion gives a different perspective on complexity.  One way to measure citations is through distinct cites or unique case cites within an opinion. For example, if two citations within a opinion cite the same case then these are treated as one distinct cite.  The opinions this term with the most distinct cites are covered below.

The extent of difference in cite counts between Thomas and the rest of the justices connotes the possibility that he has more detailed legal analyses in his opinions this term, although like most justices, many of his citations are used as support for positions and are not analyzed in great depth.  This count data still does likely present an important gauge of relative clerk workload.

We can also turn this around a bit and look at the cases that have been distinctly cited most often term.

The case with the most distinct cites to it so far this term is Arbaugh v. Y & H Corp. which deals with the Court’s proper jurisdiction.  While Arbaugh appeared in seven opinions so far this term, several other cases appeared in six including the Court’s recent decision in Bank Markazi which relates to whether certain statutorily directed judgments pass constitutional muster.

Looking at the number of citations in a case or the number of times a case is cited gives a sense of complexity and case importance. Another metric of case importance though has to do with case age.  Several empirical papers show an inverse relationship between cases’ ages and the frequency with which the justices cite them.  With this implication in mind we can look at the age of distinct Supreme Court cites so far this term for consistency with this hypothesis.

Expectations based on this graph may be that the Court tends to cite more recent cases with greater frequency or that older cases that are cited must stand for particularly important positions.  The choice of precedent by age is not always an entirely subjective decision though as the line of precedent related to individual cases might warrant or require the application of older or newer precedent.

The distinctions at the case level are visible in the figure below which shows the average decision year of Supreme Court cases cited in this term’s opinions. 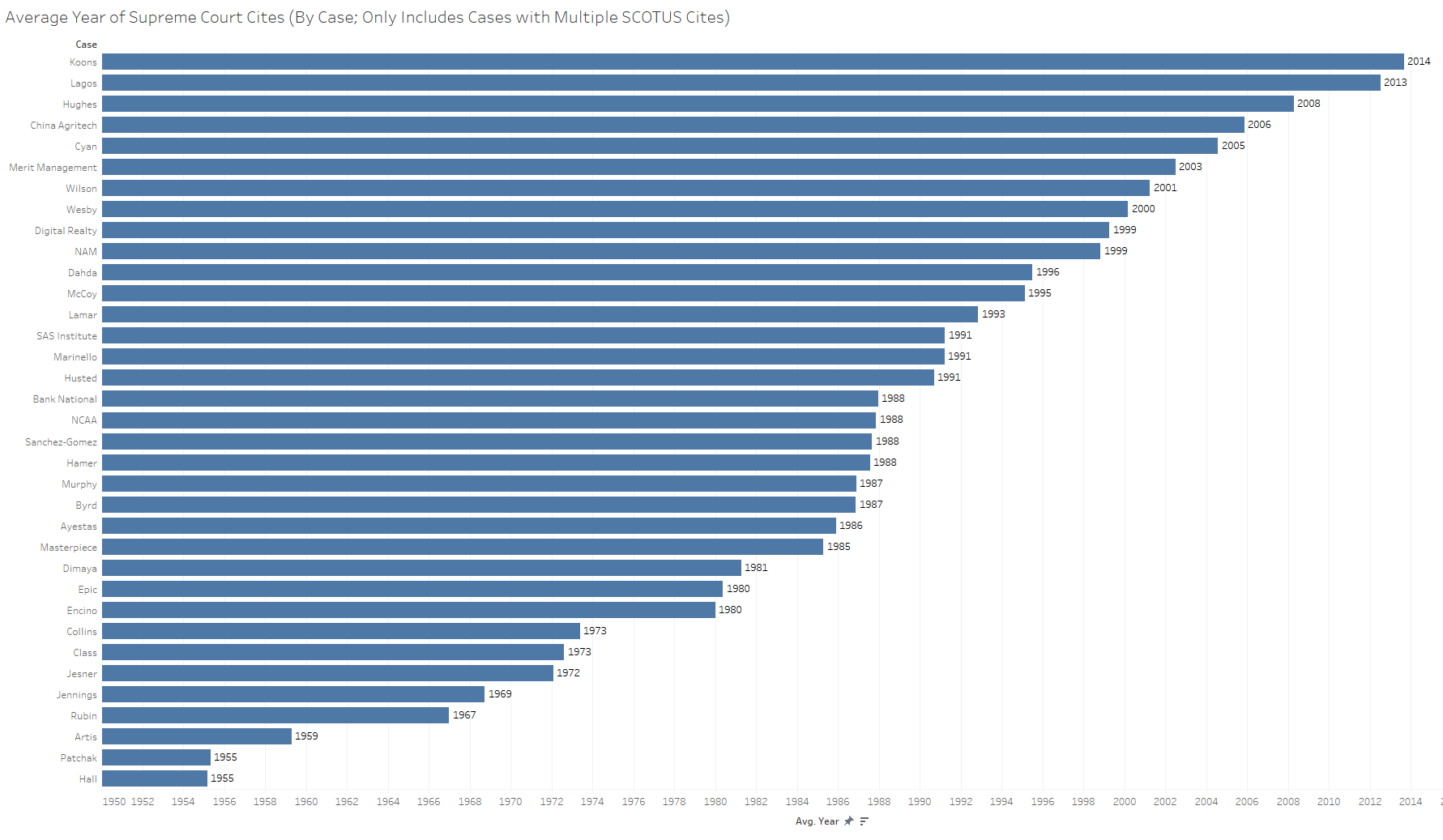 The 226 years of variation in case age for cases cited this term leaves quite a bit of room for older cases to skew the average.  With this in mind, the 59 years of spread between the average year of cases cited in Koons and in Hall or Patchak still says a lot about the variation in age of precedent cited in different cases.

This variation is not only visible at the case level but also between justices.

So far this term Kagan and Kennedy, for instance, have utilized much more recent precedent in distinct cites than either Breyer or Gorsuch. This likely relates to case specific factors as well as to personal predilections.  Looking at case age or year alone hides the substance of cases that compose these measures. The next two figures look at some of the oldest and newest cases cited by this term’s opinions.

The following figure looks at the number of distinct cites to cases decided on or before 1850. 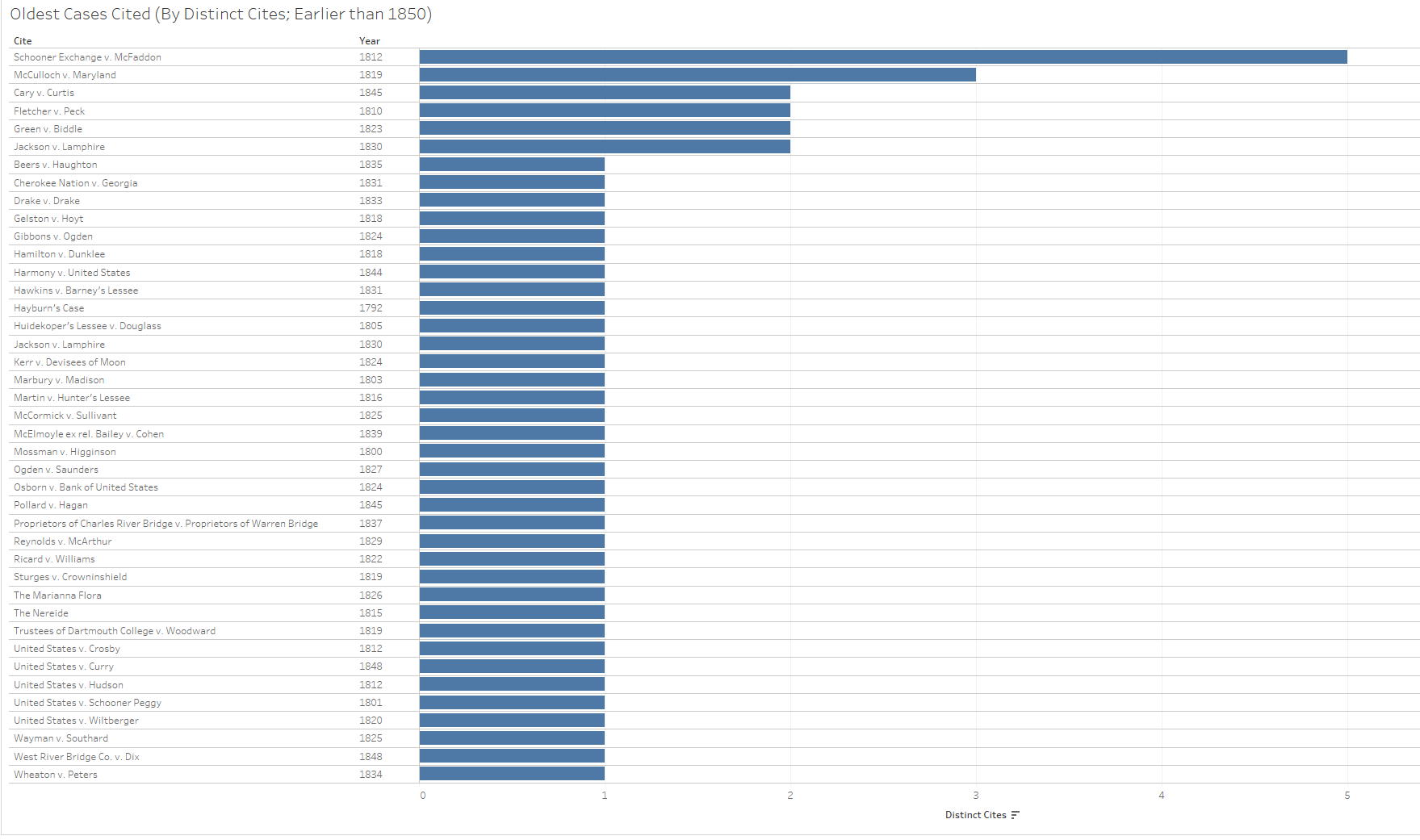 Another jurisdictional case tops this list – that of The Schooner Exchange v. McFaddon.  Schooner Exchange was actually looked at more frequently this term than much more recognizable cases like McCulloch v. Maryland and Fletcher v. Peck.  The trailblazing decision of Marbury v. Madison only appeared in one opinion so far this term.

The Court was quite willing to cite recent decisions in its opinions this term. This includes a cite in Koons to the Hughes decision which the Court released the same day.  The following figure isolates distinct cites to decisions from the past two years. 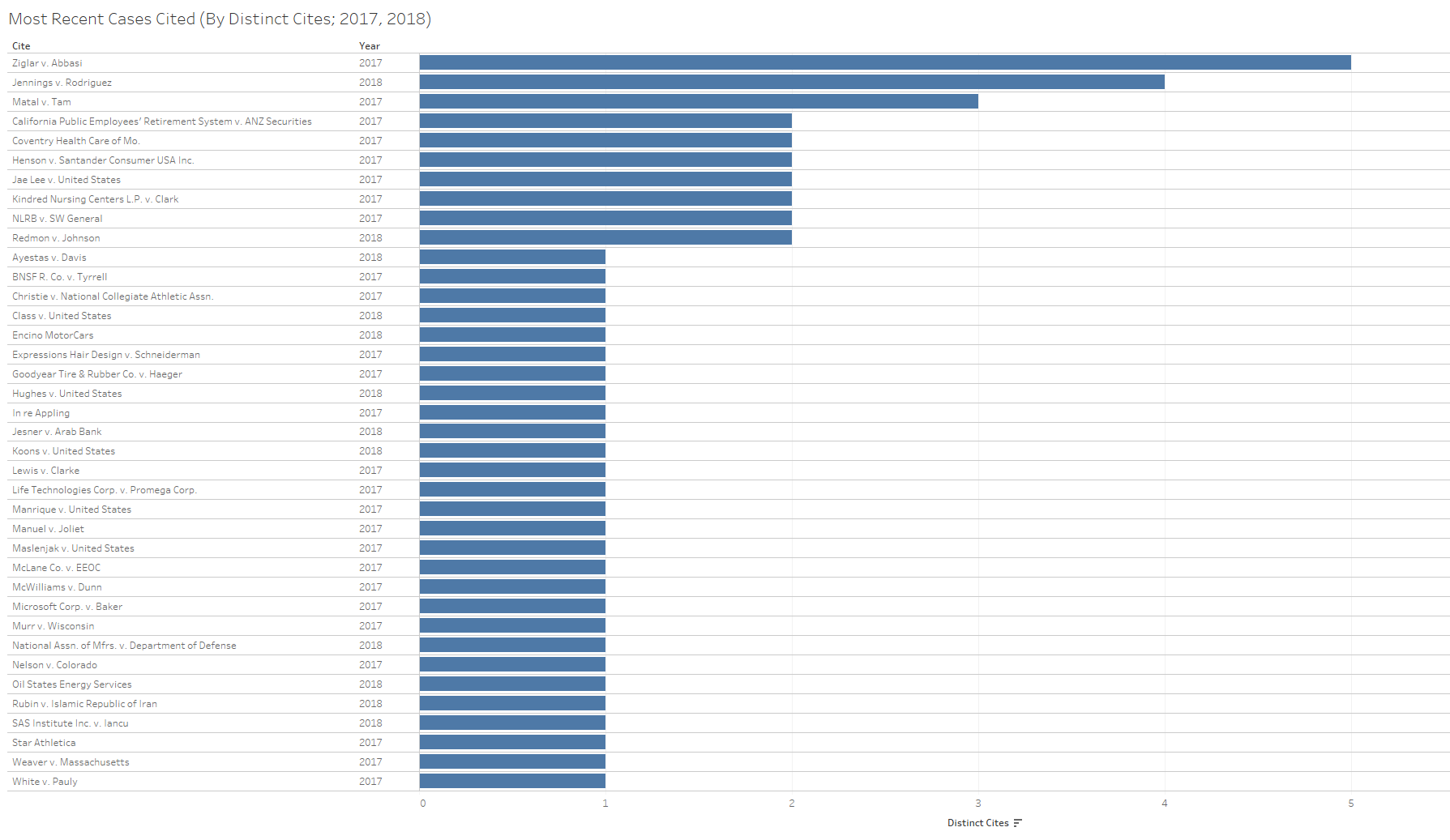 These measures show varying levels of opinion complexity.  They convey potentiality different amounts of effort required by particular cases as well as the justices’ willingness to dive into the panoply of the Court’s historic decisions.  While opinion complexity is difficult to establish with an individual measure, the convergence of multiple measures gives a sense of the combined pressure put on each justice with each opinion, and the self-imposed workload choices justices have made so far this term.