Supreme Court Justices make few official decisions during the summer. Generally, these relate to emergency matter that require quick injunctive responses. For lawyers, however, the situation is quite different (as the saying goes “time and tide wait for no man”).  While the Court does not rule on cases during the summer, cert petitions accumulate just as they do throughout the rest of the calendar year. This post takes a look at petitions filed between the end of the Supreme Court’s 2015 Term and August 22, 2016. Below is a figure that shows the number of petitions for writs of certiorari filed by day during this period.*

There were 171 petitions for writs of certiorari filed to the Court between June 28 and August 22, 2016 (July 25th saw the most petitions with 11). These petitions (as most groups of petitions do) run the gamut from those that may lead to grants to those that are quite unlikely to survive a clerk’s first reading. I gathered various pieces of data about each petition such as the attorney of record, lower court, etc. Oftentimes such information provides a helpful gauge as to which cases the Court will select to hear (although clearly there are other factors involved).

One of the interesting petitions that the Court will not likely hear in the near future involves the Question:

“Can a child who is born out of the territory and jurisdiction of the United States to at least one U.S. citizen parent be an Article II natural born citizen?”

The petition in this case, Elliott v. Cruz (16-13) challenges Ted Cruz’s ability to run for President based on the geographic location where he was born. There are many less salacious petitions as well. 20 or almost 12% of the petitions were pro-se or filed by the petitioner without naming an outside attorney as counsel of record (there is an interesting body of scholarship examining instances where attorneys “ghost-write” pro-se petitions. For those interested, here is a link to one such article by John C. Rothermich in Fordham’s Law Review).

As petitions regarding issues that are the subject of splits between courts of appeal often dominate the list of cases the Court grants, this is one aspect I looked for in reviewing petitions. There are variations in the specificity of the allegations of splits between courts and not all allegations clearly relate to active splits. According to my count, 54 of the petitions alleged that the question at the heart of the petition was subject to a split in the decisions of several lower courts. 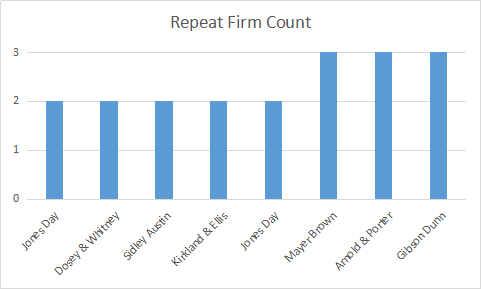 The third firm with three such petitions is Mayer Brown.
There are also a few geographic variables of interest. First, where are the attorneys that wrote these petitions located? The figure below has the states where at least five of these petitions originated. 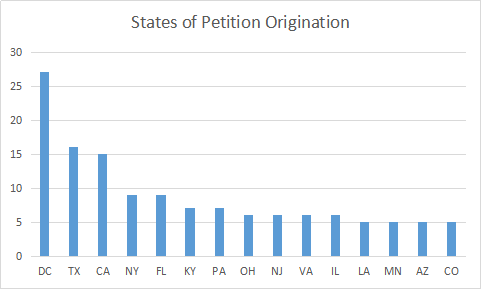 Not surprisingly, more attorneys were based out of D.C. (27) than any other state or region. After D.C. the most petitions came from the most populated states California and Texas (16 from Texas and 15 from California).

Focusing on the lower courts, the court with cases that led to the most petitions was the Sixth Circuit Court of Appeals. 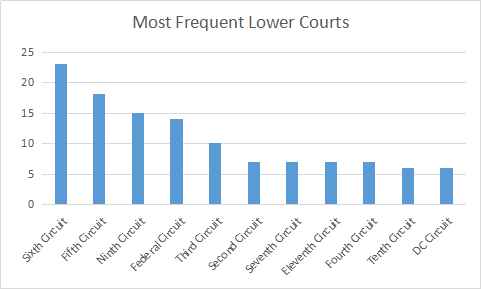 Respondents to these petitions have the option of responding to cert petitions or waiving a response. The party that most commonly waives the right to respond is the United States. In other instances parties may waive responses when they feel there is little merit to the petition or, like the U.S., the party is often mentioned on petitions and has to prioritize when it responds. Like the number of alleged circuit splits, there were 54 instances of response waivers stemming from the 171 petitions.

Ten of these petitions have at least one amicus brief associated with them at the cert level so far. Only two have more than one associated brief. These are for Kindred Nursing Centers v. Wellner (two briefs) and Saint Peter’s Healthcare System v. Kaplan (as well as the related case Advocates Health Network v. Stapleton with five briefs). High levels of amicus brief filings often correlate with petitions filed by high-profile attorneys and these two instances are no exception. Lisa Blatt filed the petition in Saint Peter’s Healthcare and Mayer Brown’s Andrew Pincus filed the petition in Kindred Nursing.

Based on current grant rates likely less than a handful of the 171 petitions will eventually be granted by the Court.