Supreme Court nominee Neil Gorsuch has a fairly pristine record and is himself one of the least controversial nominees to the Court in recent memory. This however will not be enough to make for a smooth confirmation.  After Senate Majority Leader Mitch McConnell refused to act on Merrick Garland’s nomination, there is the sense among some Democrats that this nomination is illegitimate.  President Trump has already advised Senator McConnell to, “go nuclear,” and reduce the vote threshold to 51 from 60, if Senate Democrats stand in the way of Gorsuch’s confirmation.

Garland’s nomination sat pending in the Senate for an unprecedented 293 days before it expired in early January. The GOP could possibly cite this prolonged period of a short-staffed court as reason to speed up the sometimes lengthy and extensive confirmation process for Supreme Court justices. Senator McConnell and the GOP cited adherence to the so-called “Biden Rule,” stemming from a June 1992 speech on the floor where then-Senator Joe Biden advanced the view that the Senate Judiciary Committee should consider not holding confirmation hearings in a political campaign season.

Accusations of dilatory tactics are likely to be frequent during this impending confirmation process, given the current discourse and the political climate, as well as comments already made by some Democratic senators who have called this “a stolen seat.”  This post provides context to the average length of time Supreme Court nominees have waited before having a Senate vote on their nomination under differing  Congressional compositions. 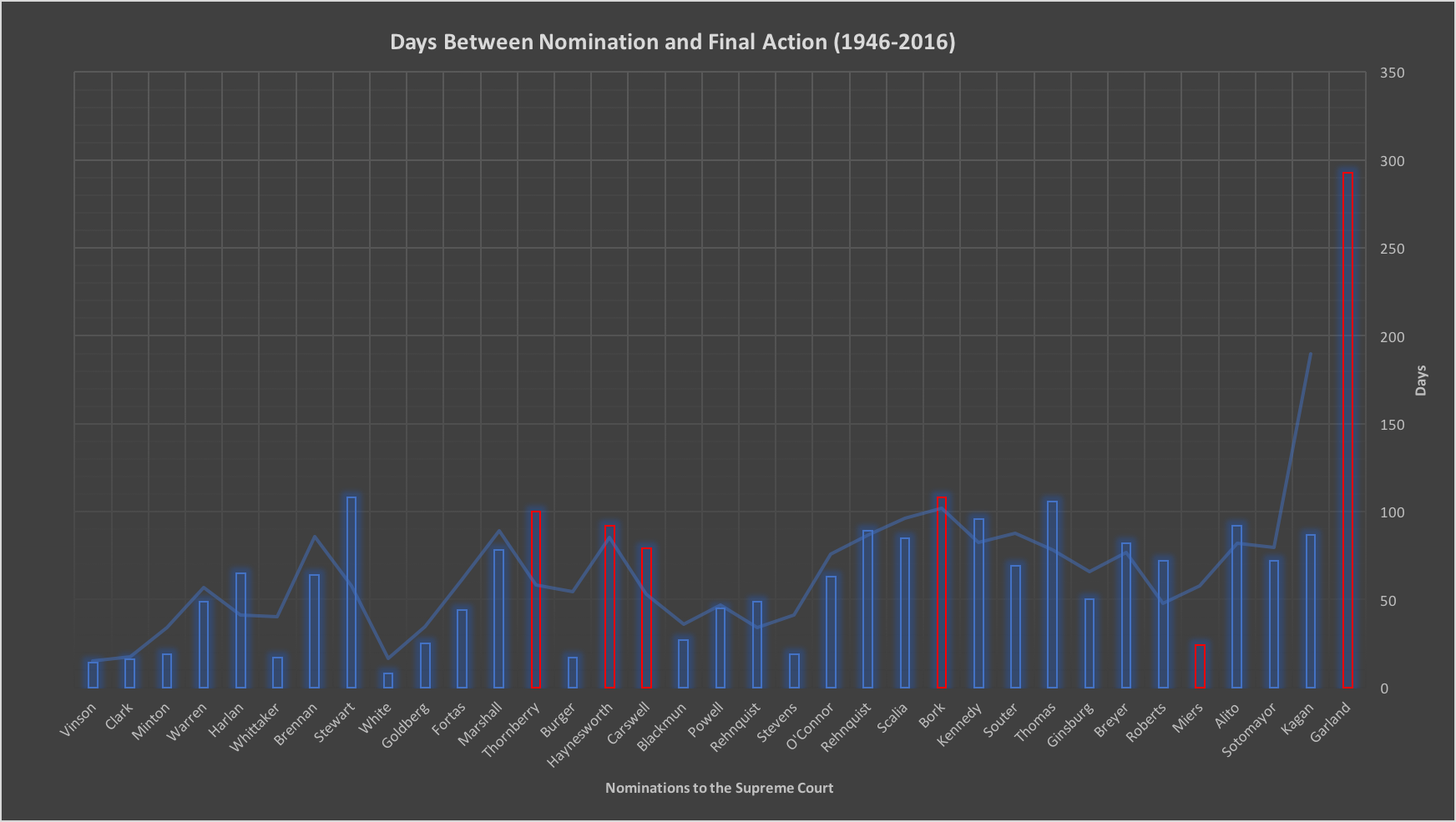 Note: Moving line across bars is a running average of time to confirmation vote (or withdrawal of nomination). Red bars are for down votes or withdrawn nominations.

Since 1946, thirty-four individuals have been nominated to serve on the high court, thirty of which have been confirmed and have gone on to serve.  Prior to President Trump’s Supreme Court nominee, there have been 161 formal nominations to the Court, and 124 confirmations, which puts the all-time confirmation percentage at 77%.

From Presidents Washington to Harding, the time from nomination to confirmation was rarely more than approximately thirty.  Since 1786, nominees have waited an average of twenty-five days, however that is skewed by the nominations in the 18th and 19th centuries that were occasionally voted on only hours after the nomination was made.  Since 1946, the average wait time for a vote is fifty-nine days (unless Merrick Garland is included in which case the average is 66).  Justice Byron White was the only nominee to the Court since 1946 to be given a vote in less than ten days.

The average wait time changes when we account for the party of the nominating president and the Senate majority.  Merrick Garland’s nomination marks the only time in recent history that a Democratic president sent a nomination to a majority Republican Senate, which makes the average wait time for any action (or inaction) in that scenario 293 days.  Democratic presidents have faced Republican majorities in the Senate, however no nominations were made during such sessions of Congress.

Republican presidents who have sent nominations to Democratic majorities in the Senate have seen their nominees to the Court wait an average time of sixty-four days before a vote.  The two outliers in this group are Justice Clarence Thomas, whose 106-day confirmation process was slowed by accusation of sexual harassment and Robert Bork, who was eventually rejected by the Senate after 108 days.

When Democrats have held the presidency and the Senate, nominees to the Supreme Court have waited an average of forty-five days from nomination to a vote.  Justice Elena Kagan, President Obama’s most recent successful nomination to the Court waited eighty-seven days, while Justice Ginsburg had the shortest intervening period in recent history, with fifty days.

In 2005, Justice Alito’s nomination sat before a Republican Senate for ninety-two days before being brought to a vote on the floor.  Justice Anthony Kennedy waited ninety-six days for a vote, and was confirmed 97-0. Justice Kennedy was one of the last justices aside from Justice Souter to invite little to no opposition.  The nominations of Justice Scalia and Chief Justice Rehnquist pended eighty-five and eighty-nine days, respectively.

Most Supreme Court nominees throughout history have been confirmed by the US Senate and taken a seat on the court.  Since 1789, only twelve nominees have been rejected and thirteen have had their nomination withdrawn by the President or withdrew their nomination on their own accord.  The three nominees rejected by the US Senate since 1969, were all nominated by a Republican President and rejected by a Democratic Senate.  Their wait times from nomination to vote on the floor were no longer than their confirmed counterparts.

There were seven rejections or withdrawals of nominees between 1861 and 1930, and in each of those occurrences, the nominating President and the Senate majority were from the same party.

If history gives us any predictive insight into what to expect in the future, nominees to the Court and nominating presidents should not expect a vote in under fifty days.  Any expectation of a hastened confirmation process for whatever reason is unfounded in recent history, at least as far back as 1975 when Justice John Paul Stevens nomination sat for only nineteen days.  The nominations of Chief Justice Burger, and Justices Stevens and Blackmun are the three quickest since 1969.  In each of these cases, a Republican President sent the nomination to a Democratic Senate.

Based on these experiences and given the current political climate we might expect a vote on Judge Gorsuch’s nomination in the seventy-five to one-hundred-day range from his nomination on January 31, 2017, placing the potential vote between approximately April 17 and May 11 of this year, whether or not the nuclear option is invoked.