During the 2018 term, the Supreme Court heard 67 oral arguments leading to decisions. The justices’ opinions cited briefs filed in these cases and law articles approximately 601 times. These citations were from a total of approximately 330 briefs and articles.  The citations were primarily clustered in certain cases. For instance, 30 cases or about 45% included citations to law articles.  58 decisions cited to briefs within those cases equating to almost 87% of argued cases. Within this set of cases, certain decisions, opinions, and justices cited to briefs and articles much more frequently than others.

Citations were also not evenly distributed between decisions that contained them as some had only a few while others had a multitude. The first figure shows the number of cites to unique briefs in these cases (only briefs filed at the Supreme Court level within that particular case) on the left and unique law articles (based on journal name abbreviation) on the right. The graph for briefs shows cases with five or more unique briefs cited and the graph for articles shows cases with three or more law articles cited.

While briefs were cited in decisions in a much larger portion of the cases argued this term, more unique articles than briefs were cited in particular cases.  American Legion had the most cites to different briefs of the cases this term with ten.  Justice Ginsburg’s dissent in the case had the most cites the brief followed by Alito’s opinion for the Court.  After American Legion, the justices cited0 seven distinct briefs in three different cases — Department of Commerce v. New York, Knick v. Township of Scott, Pennsylvania, and Virginia Uranium v. Warren.

Gorsuch’s cited 119 combined briefs and articles and his 90 cites to law articles far surpasses those of any other justice with Alito citing the second most at 23.  Kagan cited more briefs than any other justice with 92 and with 14 cites to law articles Kagan’s total cite count comes in second of the justices with 106.  Sotomayor had the third most overall cites with 83 followed by Ginsburg at 79 and Alito at 71.

The next figure picks apart the distribution of cites to law articles by looking at when justices cited individual law journals three or more times. These cites may have been in the same or in different cases. 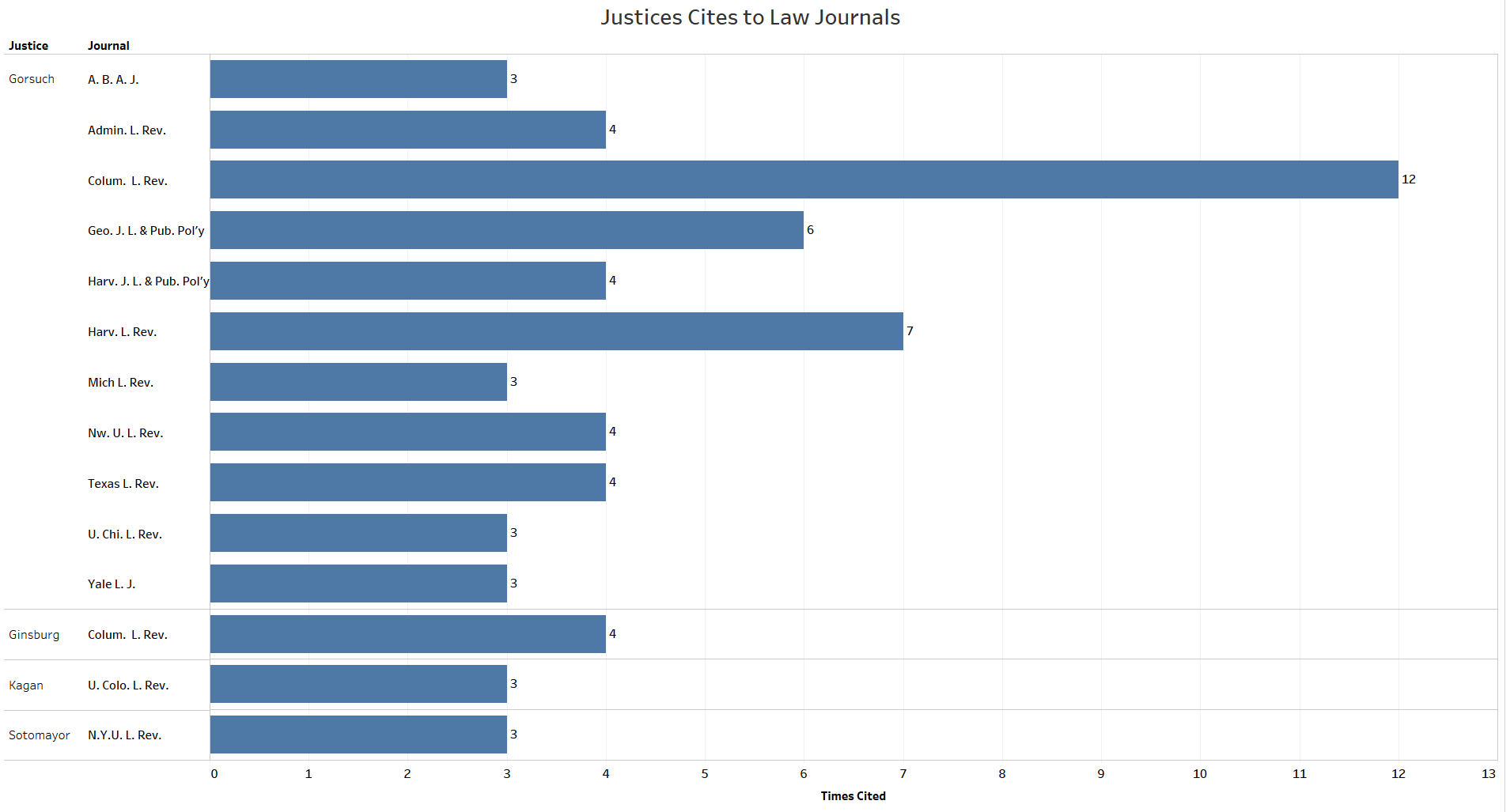 The majority of Gorsuch’s cites to law reviews were in Kisor v. Wilke where he cited them 48 times.  Breaking these down by individual cases and law journals, Gorsuch cited Columbia Law Review seven times in Kisor, three times in Gamble, once in Gundy, and once Haymond.  Gorsuch’s seven cites to Harvard Law Review articles come in Kisor (4), Tennessee Wine (2), and Bucklew (1).  Ginsburg’s four cites to Columbia Law Review were all in Gamble.

Citation volume varies greatly within and between cases with justices citing briefs and law journals most frequently in a handful of decisions. Certain attorneys had briefs cited most frequently by the justices. These citation numbers account for both merits parties’ briefs and amicus briefs.

At the between case level, only one attorney, Paul Clement, was cited in four different decisions this term.  Clement was counsel of record on amicus briefs cited in Jam, Gamble, and American Legion. He was also counsel of record for the appellants in Bethune Hill. Ginsburg cited the appellants’ main brief twice and the reply brief once in her majority opinion.  Additionally, two attorneys’ briefs were cited in three cases: David Frederick and Seth Waxman. 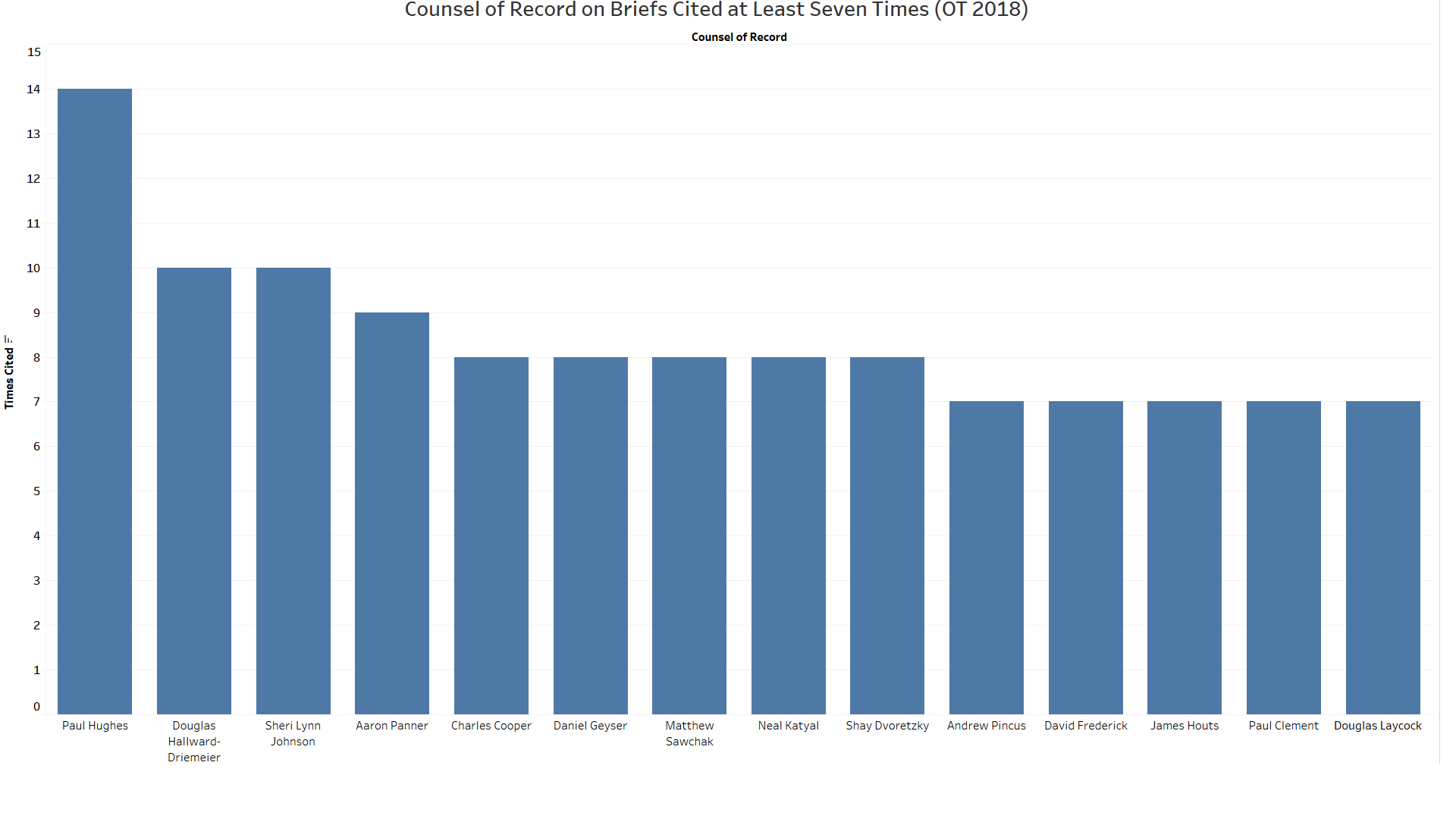 Paul Hughes was counsel of record on briefs with the most total citations with 14. These were from his brief for the petitioner in Kisor v. Wilke (cited 10 times) and brief for the respondent in Manhattan Community Access Corp. v. Halleck. The two attorneys cited ten times apiece both found these cites in a single case. Douglas Hallward-Driemeier’s cites came as counsel of record for the respondents in Mission Product Holdings Inc. v. Tempnology, LLC while Sheri Lynn Johnson’s cites were from her brief for her brief for the petitioner in Flowers v. Mississippi.

This figure is arranged with firms with the greatest number attorneys as counsel of record cited in these cases to fewest.

The justices looked to specific law journals for the bulk of citations this term as well.  The following figure looks at journals that were uniquely cited in the most total opinions this term. This method counts cites from multiple opinions in the same cases as multiple unique cites. 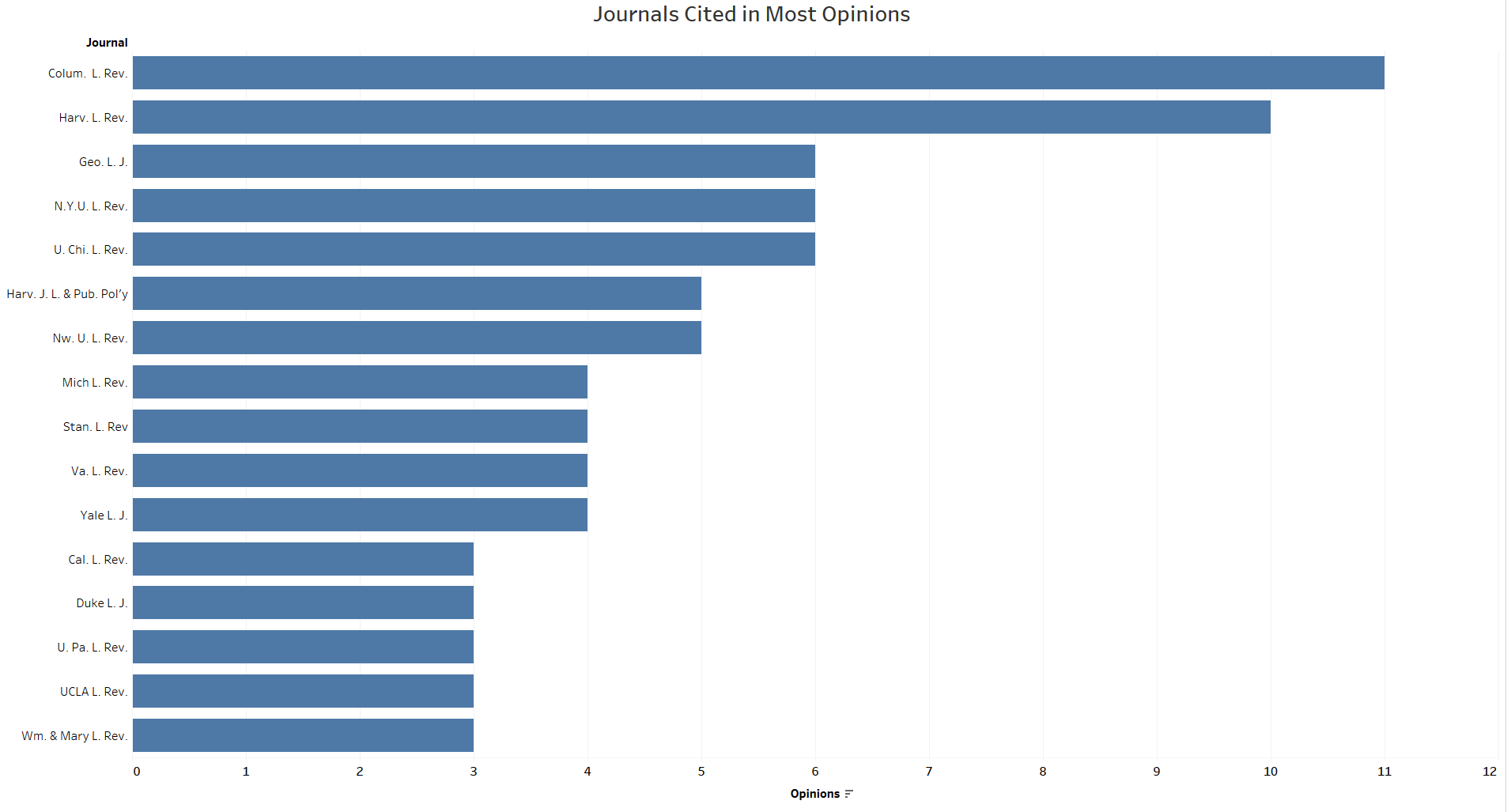 These citations numbers are in line with what we have seen in past terms for law journals and and for briefs.  Substantial variation exists between the justices’ individual practices and between the utility of these sources for different cases.  Along with looking at the briefs and journals cited most frequently, another interesting layer to these data deal with why such cites are so important in particular cases relative to others. Whether the reason has to do with the relationship between certain case issues and the legal academy’s views or between certain cases and the positions and facts relayed in the briefs, the justices certainly do not cite these sources evenly across opinions. Such understandings could prove quite helpful in informing practitioners’ strategic brief writing choices moving forward.